We’re currently witnessing a silent, rapid transformation of the world around us, a paradigm shift in which enabling technologies, driven by IoT and AI, are leading to the creation of new products, new services and new client experiences without us barely realizing it. Machines are getting smarter, are beginning to communicate with each other and, more importantly, are starting to interact with us through our senses. They’re also capable of printing objects in 3D and even take care of our comfort and household bills. We now have smart LED light bulbs that can connect to the Internet and achieve 100% lighting for the user while generating energy savings of 90% through their integrated sensors. Could Thomas Edison ever have imagined that light bulbs would one day be intelligent?

Wherever we turn our heads, we can observe a massive digital trans¬formation occurring. Ninety percent of the data generated in the last hundred years has been generated within the past two years.
In the early 2020s, while utopians, dystopians and possibilists trying to agree on what leaders and companies of the future should be like in order to compete in the Fourth Industrial Revolution with its well-known digital and VUCA environment in which change is the only constant, the SARS-CoV-2 coronavirus appeared, spreading lethally around the world, paralyzing almost all social and economic activity until today, causing the greatest disruption since World War II and put¬ting us all in the most VUCA context that we can remember.
This pandemic will have an impact on what econ¬omists cryptically refer to as the “first derivative” –in other words, the impact is in the speed of change rather than the change itself. A speed of change that Felice, Laborda and many other academics agree with, an expo¬nential change that is even faster. The future will come sooner than we think as the reactive psychological barrier to digital change has vanished from many conservative minds.

The Eight Ds of the New Economy

At the moment, a large part of emerging technologies and sciences are supported by digitalization –fostered by the COVID-19, and many of these are disruptive. Computational power is doubling every 18 months without any cost increase, while electronic integration and miniaturization is becoming more widespread. This is causing disruption across industries but also helps to break down socio-economic barriers. The paradigm of our new dig¬ital society and economy is characterized by eight Ds that are therefore the engine that is driving the new economy and transforming businesses:

1. Digitalized: Anything that becomes digitalized enters the exponential growth of computing power, thus blurring the digital and physical worlds and providing new revenue and value-producing opportunities. Digital information is easy to access, share and distribute. Once something is represented in numbers –from music to technology– it becomes information-based technology and can spread virally at the speed of the Internet.
2. Deceptive: The early stages of digitalization are deceptive because, like all exponential changes, the quality and market price curve start out flat, so it’s hard to spot. This hinders perception of its disruptive power and its future growth.
3. Disruptive: Anything that is digitalized makes previous devices obsolete and underperforming. When new technologies outperform traditional ones in function and customer value, they reach new markets, which disrupts existing markets.
4. Demonetized: Money is increasingly removed from the equation as technology becomes cheaper, often to the point of becoming free. A good example is the music market: an almost infinite number of songs can now be downloaded per month for less than what a CD cost ten years ago. The basic functions of current smartphones (GPS, maps, email, video, camera, music player, video conferencing, encyclopedia, video game console etc.) would have cost about a thousand times the current value twenty years ago, while consuming a hundred times more energy. Customers now pay with their data for the free apps and services they use.
5. Dematerialized: The miniaturization and virtualization of physical products and services is being replaced with intangible alternatives, eliminating the need for single-use devices and services. We no longer need music or video players, GPS devices or maps. Smartphones incorporate more and more nanotechnology for the same price. Soon, smartphones will be able to take our temperature and blood pressure, and someday even diagnose diseases.
6. Democratized: Once something is digitalized, more people have access to it through Internet access and communication technologies. This has caused powerful gatekeepers and governments to lose some of their control, as powerful technologies are not only available to governments, organizations or the wealthy, but also to people with less purchasing power in remote places.
7. Decentralized: Cloud computing, blockchain, and crowd resources are breaking down organizational boundaries by eliminating physical distances and flattening strongly hierarchical organizations.
8. Decarbonized: Renewable and green energies instead of fossil fuel consumption, the reduction of our CO2 footprint, the elimination of plastic and waste, and the circular economy are key factors when it comes to containing climate change.

We can think of these Ds as the coordinates on the map to the future; we have to know them before choosing our path. They represent the new management context in which executives must lead and companies must compete. Recognizing the eight Ds can therefore help business leaders navigate exponential growth in this uncharted new era of digitalization. They will help us reach our goals, but they also represent challenges that we need to overcome along the way.

The Six Mega Trends to watch out

Sooner or later, we will eventually stop talking about digitalization in much the same way as we no longer talk about the novelty of electricity. We will turn our attention to the “smartization” of business models, products, services, and processes as they become more intelligent and autonomous through the introduction of AI. Consumers and clients are going to play an integral part in the Fourth Industrial Revolution because digital innovations and technologies will lead to the formation of a sharing economy based on mobility. There are also six “mega trends” to watch out for:

1. Faster, cheaper computer power is boosting exponential growth.
2. Miniaturization and interactions between microelectronic components and sensors, fostered by the smartphone industry that sells hundreds of millions of units per year.
3. Socialization of energy by the commoditization of solar power.
4. Commoditization of electricity battery storage.
5. Expiration of key patents.
6. Deep Tech corporate ventures, where science and engineering meet business.

During the crisis most companies will have experimented heavily with digital applications and enabling technologies, and many of them will begin to allow AI systems to take control of complex decisions, predict human behaviors, recognize images, analyze in real time huge amounts of unstructured data generated on the Internet, automate processes, and implement RPA apps, chatbots, voice assistants etc. through machine learning that constantly adapts and improves itself with a scalability whose marginal cost tends to zero. A study published by the Harvard Business Review has shown that augmented companies, where people and AI collaborate in harmony, improve their performance up to 6.5 times compared to other companies.

In order to compete in this faster VUCA environment the Peter Drucker’s maxim is more relevant than ever: “the best way to predict the future is to create it”. It will be an augmented future enabled by AI and the Internet of Everything (IoE), where technology and people join forces and in doing so, complement each other, and people augment their capacities and skills.

Article excerpted from the book Journey of Future Enterprise 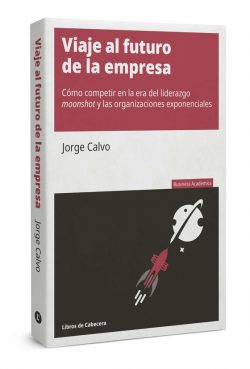